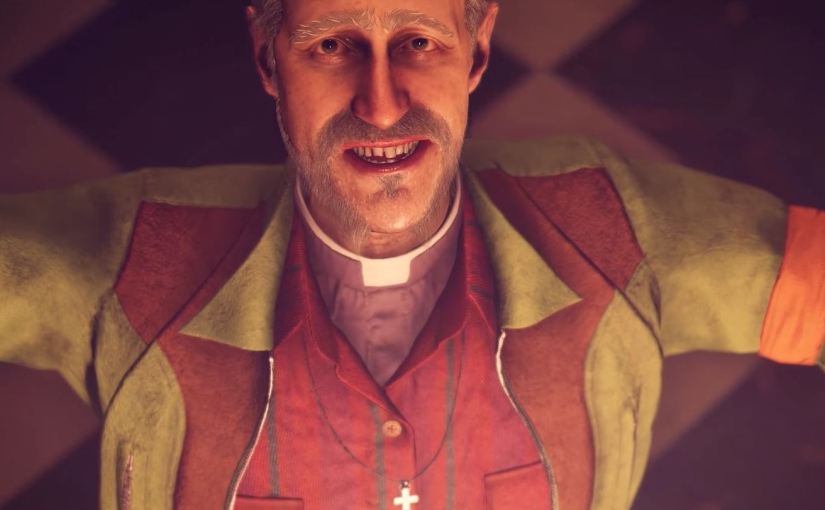 Horton and B.J.’s political debate leaves me hopeful for The New Colossus‘s portrayal of Marxism.

Yesterday, Polygon released a 30-minute gameplay video of the upcoming Wolfenstein II: The New Colossus, wherein we had the opportunity to see the dialogue cutscene found in the trailers between main protagonist B.J. Blazkowicz, and Horton Boone, the leader of a Marxist resistance movement in New Orleans. Horton is recruited into the Kreisau Circle, but not before he and B.J. get drunk and have a philosophical debate.

Horton talks about his band of revolutionaries, holed up in a battered Orleans building, describing them  as “the outcast, the poor… well, everyone apart from the American God-damn Bourgeois,” the first indication that MachineGames know their Marxist terminology. He introduces B.J. to his friend Paris Jack, “a true believer in Anarchism and a hell of a clarinet player.” Is this left unity in action? One can assume.

Then, out comes the ‘Horton Special,’ a moonshine whiskey, and the two men discuss the resistance and get pretty heated about their respective political beliefs. Horton is weary and jaded, having planned for a revolution long before the Nazi occupation. He along with many carried the banner of the civil rights movement, campaigned for equality, and protested the US draft, to which Blazkowicz garners anger, arguing that Horton and his ilk should have fought in the war instead of “passing out Bolshevik propaganda and opposing the draft on every street corner.”

This triggers the now well-known revolutionary rant from Horton, in which he talks about standing up against the “imperial war machine of the United States of America and the greedy money men of wall street who was itching to send the children of the proletariat off to die in foreign lands so that they could be filling their coffers.” That, seeing through America’s  exploitation of its people, decided not to co-operate and protest in the way that he did.

It looks like it’s going to be a very faithful portrayal of Marxist and other left-leaning revolutionaries. And with other small details littered throughout the scene, like a hammer and sickle flag in the background of one shot and a propaganda poster asking its readers to “become the hammer,” MachineGames really aren’t shying away from the explicit leftist thought and imagery, and what’s even more interesting to see is that these characters and their ideals are positioned on the side of the protagonists of the game.

Communists have always typically combatted the ideals and actions of Nazism of course, but it’s very uncommon that they’re portrayed as the good guys in film, TV, and video games. Often when they are, it’s to set up a shock twist wherein they betray the protagonists in order to seek their own goals.

But this cutscene has left me feeling optimistic about Wolfenstein II’s resident lefties, and alongside the diverse cast of the Kreisau Circle and the aggressive anti-Nazi messaging in all of the game’s promotional material, perhaps this’ll be the games industry’s first really great triple-A portrayal of the far-left.

Astrid is a games journalist living in Bournemouth. She's the Editor-in-chief of Indie Haven, co-host of the Gameographers and the Real Heroes podcasts, and has freelance pieces published on Waypoint. View all posts by Astrid Johnson