Hello Neighbor, a stealth-horror game in which you infiltrate your neighbor’s house to find out what he’s hiding in the basement, has released it’s Alpha 2 build, along with two new trailers showcasing a glimpse of the story and a new way of distracting your antagonist.

The new build went live on 22nd November, with the story trailer showing us sections of the introduction to the game, playable in this latest Alpha update, wherein the player moves into a new house, and experiences what appears to be a home invasion from the infamous Neighbor character. This introduction shows off the ‘tutorial house,’ an area that allows the player to get to grips with basic mechanics, like removing the nails from boarded-up doors and picking up/moving objects.

Also revealed is a new mechanic that can be utilized in countering the Neighbor’s pursuit; fireworks. Setting off these fireworks disorients the Neighbor and allows the player to escape and find new locations to hide.

The new update features more than just more story and new distractions. There have been graphics updates that include depth of field, and a big improvement to the AI of the Neighbor, such as the registering of scenery changes and a tweaked field of view that makes sneaking easier. A full list of updates can be found in this blog post on TinyBuild’s website.

Alpha 2 is a larger step towards the final game compared to it’s predecessors. As quoted in a press release from TinyBuild: “Everything you’ve seen before regarding Hello Neighbor is throw-away, used for testing & evaluating the direction for the full game. Today’s Alpha 2 is a glimpse into what the final game looks, feels, sounds & plays like.” 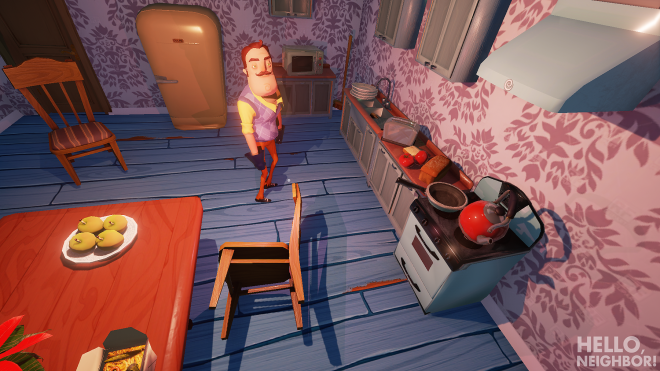 I’ve yet to dip in to Hello Neighbor, but now seems like the perfect opportunity to do so as the game starts becoming a better reflection of what the full release will be like. I’ll be sure to share my impressions in the near-future.

Astrid is a games journalist living in Bournemouth. She's the Editor-in-chief of Indie Haven, co-host of the Gameographers and the Real Heroes podcasts, and has freelance pieces published on Waypoint. View all posts by Astrid Johnson